You are here: Home / All posts / Disadvantage and disease: finding solutions to inequalities in cancer

The COVID-19 pandemic has brought renewed focus to the great health inequalities between different communities in our society. Looking at cancer care, these inequalities exist across the whole cancer pathway from uptake in screening, likelihood to present early with symptoms, participation in clinical trials, diagnosis and access to treatments. In this blog, from our On Cancer publication, Dr Philip Crosbie, Dr Suzanne Johnson, and Professor David Shackley outline how economic and social disparities are affecting cancer diagnosis and treatment across the UK.

A combination of causes

Differences across the cancer continuum are born from a combination of structural inequalities, socioeconomic circumstances, socioenvironmental behaviours and lifestyle choices. Gender, racial and educational inequalities also play a part. These complex factors often influence generations and can result in deep-rooted fear and mistrust within communities, leading to barriers to accessing healthcare.

Predominantly, deprivation and lifestyle choices seem to be the most significant contributors, with Cancer Research UK estimating that lifestyle choices cause 40% of our cancers. Greater Manchester is significantly affected by health inequalities. It is the 38th most deprived Sustainability and Transformation Partnership (STP) area in England (of 42), and as a measure of lifestyle choices, it has the 39th highest smoking rate, which is 2% above the England average. These factors go some way to explaining the higher cancer incidences and mortality rates experienced in Greater Manchester compared to other, more affluent areas of the country.

People from the most disadvantaged socioeconomic backgrounds are less likely to attend cancer screening tests and thus likely to present later with their disease. We know that late stage at presentation is a bad prognostic marker: national data show that 49% of the most deprived quintile have early stage at diagnosis versus 58% for the least deprived. The stage can have a huge impact: for example, in colorectal cancer – of the four stages – stage one patients have a greater than 90% chance of surviving five years after diagnosis as opposed to stage four patients where the figure is less than 10%.

Additionally, the under-representation of these groups within clinical trials limits the evidence available for better understanding their disease. This means there is a relative lack of understanding of cancer drivers in many marginalised groups, and this limits our ability to tackle it.

In its starkest terms, those who are most disadvantaged in life to begin with, are also most likely to be disproportionately and unfairly affected by a cancer diagnosis, detection and treatment.

From tradition to inclusion

Such disparities need addressing in ways which move from standard, traditional care packages into more inclusive, personalised and diverse packages that benefit those most in need. The pandemic, in revealing the extent of these disparities in healthcare, has proven that it is now essential that they are addressed to achieve significant and lasting change. The health disparities across the cancer continuum can be addressed by interventions such as community screening, community engagement and home-based testing.

Pioneering the move from healthcare models that deliver traditional care and detection packages to those that are more inclusive, diverse and community-focused are essential in helping to redress these deep-rooted health inequalities.

Lung cancer is a deadly disease with a five-year survival rate of only 16% after diagnosis. As lung cancer is most prevalent in areas of deprivation and is a driver of health inequality, it’s a priority for action. In short, lung cancer is by far the biggest cause of cancer death, and those deaths are concentrated in deprived communities.

The ‘Lung Health Check’ (LHC) was an initiative trialled by the lung cancer team at Wythenshawe Hospital (Manchester University NHS Foundation Trust), in partnership with Macmillan Cancer Support. The project took mobile screening units and placed them in public spaces across Manchester that were easy to spot and access for anyone without transport. They advertised their activity as a ‘lung health check’ to dispel fears around cancer and the perceived ‘death sentence’ of a potential lung cancer diagnosis. The locations offered an opportunity to engage with health professionals in a much more informal setting compared to a traditional clinic.

The benefits of the LHC approach were soon clear. It delivered a high number of early detection diagnoses (79% diagnosed at stage one vs a national average of 19.5%) and it engaged with those communities most at risk of this particular cancer. The project showed it could improve patient outcomes and reduce the burden of advanced disease and palliative care costs for the NHS.

The pilot showed a threefold increase in detection of lung cancer at its earlier stages where the tumour is 90% curable and the project has now been rolled out on a local and national scale through the National Targeted Lung Health Check programme, funded by NHS England.

By taking a holistic approach, other diseases can also be detected at the same time such as Chronic Obstructive Pulmonary Disease (COPD) which is far more common than lung cancer with higher death rates, along with cardiovascular disease. Using the opportunity presented by the Lung Health Check initiative to screen for these three leading causes of premature death will engage hard-to-reach communities and reduce costs to the NHS and patients of late diagnosis. Increased participation of individuals from disadvantaged groups will also have the benefit of increasing their representation within clinical studies and help inform future treatments.

To fully engage with communities, it is vital to reach out to them, make connections and build trust to bring them closer to primary care providers and researchers. It is also essential to capture lived experiences. Multiple initiatives have demonstrated this approach successfully, leading to various forums, patient and public engagement groups and long-term collaborative partnerships. The objective is to build long-lasting and sustainable relationships with communities that levels-up healthcare provision and basic research. By achieving this, individuals will feel their voice can be heard and some of the long-standing issues facing certain communities can be tackled.

Professor Emma Crosbie, Division of Cancer Sciences at Manchester is also working to develop techniques of at-home screening that can help to address cancer inequalities, specifically in female cancers. Lower screening rates found within marginalised groups are posing a problem in gynaecological cancers. An example is work to develop at-home urine tests for Human Papillomavirus (HPV), a precursor for cervical cancer, which it is hoped could address barriers to screening and contribute to improved health equity.

Engagement with those communities most at risk of health inequalities such as late cancer diagnosis is vital if a shift to early detection and improved patient outcomes in all communities is to be realised.

Leaders and policymakers within our healthcare service need to put urgent thought into how our system can be structured towards earlier interventions. Increased and meaningful community engagement is key to achieving equitable healthcare and has the added benefits of reduced strain on the NHS from the impacts of late diagnosis. A robust and well-resourced infrastructure is needed to support this.

Barriers and the opportunity for change

There are numerous challenges that come with moving to a diverse healthcare package that engages with disadvantaged and marginalised communities. Implementing successful large-scale community screening involves overcoming problems with the logistics of being based in public spaces, capacity issues, technology barriers and workforce limitations.

Looking at imaging as a diagnostic test for cancer, the UK currently has fewer radiologists per head of population compared with the European average. 2015 figures showed an estimated 4.8 consultant radiologists per 100,000 people. This is one of the lowest figures in Europe, comparing to a mean of 12 radiologists per 100,000 population for Western Europe. These limited numbers of Thoracic Radiology Specialists means reporting on such targeted lung cancer screening scans is problematic in the long term. Similarly, the UK has a significant shortage of CT scanners versus other Organisation for Economic Co-operation and Development (OECD) countries, with latest 2020 To fully engage with communities, it is vital to reach out to them, make connections and build trust to bring them closer to primary care providers and researchers. Leaders and policymakers within our healthcare service need to put urgent thought into how our system can be structured towards earlier interventions. 8 9 data showing the UK has 9.0 CT scanners per million population versus 35 in Germany, 42 in the US, and 70 in Australia.

Restructuring our healthcare system towards prevention and an early detection approach requires reversing the diagnostic and treatment pathway as well as additional funding for services that support early detection. This will also require policymakers to tackle perceived cultural barriers to encourage screening uptake and engagement with primary care providers.

The Department for Health and Social Care and NHS England have the opportunity to develop innovative cancer services that can reach and engage with all communities. A move towards inclusion is essential not only for those communities who are currently suffering from poor healthcare and the effects of late diagnosis, but also for our healthcare system which isn’t sufficiently resourced to take on the increasing burden of palliative care and treatments which result from these inequalities.

We now need robust and clear leadership on the development of a services, infrastructure and workforce development plan that will support this already world leading detection methodology.

This blog was originally published in On Cancer, which provides expert analysis and thought leadership on cancer prevention, diagnosis, and treatment.

Dr Suzanne Johnson is a lecturer in the Division of Cancer Sciences and Division lead for Social Responsibility with particular interests in developing inclusive practice in research and teaching and addressing health inequities. Her background is in basic and translational cancer research, and in 2020 Suzanne was appointed Programme Director to develop a new online Masters programme in Transformative Oncology with The University of Manchester Worldwide. 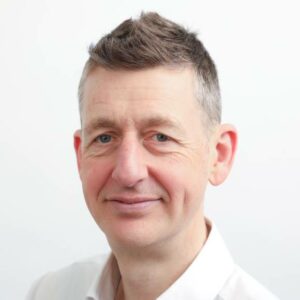 Professor David Shackley is the Clinical Lead at MAHSC (Manchester Academic Health Science Centre) for cancer working with colleagues to bring research and clinical care closer together. He is the Director of the Greater Manchester Cancer Alliance, and a Consultant Urological Surgeon. From 2015 to 2018 he was the Medical co-lead for the National Cancer Vanguard which brought GM and London together as a 10 million catchment population to develop and test new cancer approaches before a broader roll out across NHS England.