You are here: Home / All posts / UK productivity is a leadership challenge

This week Bank of England chief Mark Carney – and the University of Manchester’s own Ken Clark – highlighted the problem with productivity that our economy faces. Here Chris Bones offers some solutions.

Whilst the coalition government delivered employment and growth it did far less well on productivity.  The Bank of England reports that UK productivity is 16% behind the pre-crisis trend.  The bank suggests possibly 4% of this ‘gap’ is mis-reporting and offers possible explanations for another 6-9% specifically at underinvestment in R&D, inefficient allocation of capital to lower performing enterprises and higher firm survival rates due to cheap finance linked to quantitative easing. So what about the rest?

Regardless of how economists explain our ‘under performance’ this is a gap that needs to be addressed as a matter of priority if real wages are to recover, unemployment to fall much below where it is today and the deficit/debt challenges resolved.

Without a single lever that can be pulled, what is required is leadership from the new government not mere administration.  Without it there will be no ‘northern powerhouse’ or any other regional economic revival and we will continue with an unbalanced economy both geographically and in our dependence on financial services.

A recent Financial Times article (April 22nd 2015) argued that closing the productivity gap could be driven from government activity that focused on the efficient use of capital, land and labour.

Whilst the new government has a deregulatory, if not laissez-faire flavour this would require our new business ministers to intervene actively to deliver a step change from the track record of the last five. Here are three issues that new ministers should have at the top of their agendas:

No responsible government can ignore the need to address the productivity question.  These are complex issues and require a leadership programme – good government wont necessarily bring popularity, but it can take actions that improve the chances of our having the resources to continue to fund the health and social services needs of a rapidly aging population.

Ministers should act now and with productivity in mind: 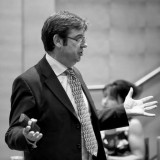 Chris Bones is professor of Creativity and Leadership. A senior executive in Diageo and Cadbury Schweppes he became the first business person to run a major European business school in 2004. He joined MBS in 2011 and his 2011 book, ‘The Cult of the Leader’ won the UK Management Book of the Year Prize. His latest book ‘Leading Digital Strategy’ addresses the challenge of leading e-commerce. He consults on leadership and digital strategy to global brands in most sectors including recently The Economist, Fitness First and Oxfam.