You are here: Home / Cities and Environment / Net-zero target by 2050? We can do better than that

Simon Bullock is a PhD student at Tyndall Manchester, working on shipping and climate change. In this blog Simon discusses the Net Zero report published this month by the Committee on Climate Change (CCC) and argues that under the principles the CCC is rightly advocating, this 2050 date is too late.

One of the big calls the CCC had to make was assessing what is an appropriate UK contribution to tackling a global problem. They argued that for two main reasons, the UK “should go further than the world average”.

The first reason for this increased ambition is due to “capability”. The UK is a rich country, with strong governance systems, and as such is better able to act on climate change than most other countries.

The second reason is “equity”. The UK has a far greater responsibility to act than almost every country because of its historical contribution to climate change over the decades.

This analysis from the CCC represents a strengthening of their view on equity compared with their 2008 report. However, calculating a net zero date based on these two principles would in fact lead to a far earlier date than their proposed target of 2050.

Alternative approach to working out a ‘fair share’ target

Deep within the CCC’s analysis is a decision about which method of calculating a ‘fair-share’ UK target is most appropriate. There are five options described by the CCC:

Equal Per Capita (EPC) – countries’ emissions converge to equal per capita by a certain date (often 2040 or 2050).

Equal Cumulative Per Capita (ECPC) – the total carbon budget for the UK is allocated according to its population size as a proportion of the world’s total. Here, it’s based on the years 1990- 2100. This gives weight to historical responsibility from 1990-2018, but not before that.

Greenhouse Development Rights (GDR) – reflects both a countries’ capability to act, and also their historical responsibility – in some approaches, this responsibility starts at the industrial revolution, in others at 1990.

Figure taken from the Net Zero report published by the Committee on Climate Change.

The CCC rules two of these approaches out straight away. EPC ignores all historical responsibility – something the CCC has decided is inappropriate as it wouldn’t enable a ‘sufficient contribution’. They consider CER to be unsuitable because it allows existing high emitters to emit proportionately more way into the future.

That leaves three methods. One of these, “capability”, is a 99% cut, essentially the same as the 100% cut the CCC choose.

The remaining two are both significantly more ambitious. The ECPC approach partially addresses countries’ different historical contributions to climate change, and would give a 116% emissions cut by 2050 – or a net zero target of 2043.

The final approach, GDR, looks at both capability and historical contributions, and would give a 156% cut – committing the UK to becoming net zero by 2033.

According to the CCC’s analysis, it wouldn’t be appropriate to apply an approach based solely on capability – they have been clear that the UK’s contribution should be based on both capability and equity.

The CCC conclude that “Considering both the UK’s relative wealth and large historical emissions … the UK … would need to reach net-zero GHG emissions considerably before 2050.” The CCC don’t spell out the 2043 and 2033 dates implied by the ECPC and GDR approaches, but these can be found from the equity database from the academics involved.

There are also other methods for assessing a UK contribution. For instance, in the SCATTER project, to create a carbon budget for Greater Manchester, Tyndall Manchester made an allowance for developing countries first, then calculated the remaining pathway for richer countries and cascaded that down to the Greater Manchester (GM) level. This indicated a GM net zero date of 2038. This is not directly comparable to the CCC dates, primarily as it is for carbon dioxide only not all greenhouse gases, but it too suggests an earlier net-zero date for the UK.

So why have the CCC not recommended a far earlier date than 2050? At heart, the reason is that the CCC argues that it is “not credible” for the UK to get to net zero faster than this.

However, their report does not, as it says, constitute the “highest possible ambition”. For example, even the ‘further ambition’ scenario still sees a 30% demand growth in aviation on today’s levels. Holding aviation demand at today’s levels is seen as merely “speculative”.

In addition, for all sectors much of what is deemed possible is determined to a large degree by cost – but the CCC acknowledges that its and the Government’s previous estimates of costs have been large over-estimates – citing for example its 2011 estimate of battery costs at $400/kWh in 2018, when in practice they are half of that. It is extremely difficult to accurately predict costs and feasibility 10 years down the line, let alone 30.

There are many voices calling for a tighter-than-2050 target – for example a cross-party group of 180 MPs, and the CCC’s own advisory group, who say: “‘Setting an earlier date than 2050 would have even more impact internationally … There may be options for credibly setting such an earlier date … A 2045 net zero GHG target could be influential”.

The UK’s target should be based on the latest climate science, as well as the CCC’s principles of capability and fairness. Instead, the CCC target falls short of being the ‘highest possible ambition, based on uncertain estimates of what might be feasible many decades from now. We know that action can happen far faster than people think is possible – look at how quickly coal has come off the UK power grid in recent years. Back in 2008, the UK Government thought that coal would provide 25% of the UK’s power in 2020, and renewables 16%. By 2019, it’s changed its 2020 projections to 0.3% coal, 45% renewables.

The UK can and should set a fair net zero earlier date than 2050. The Government has an opportunity to take the CCC’s principles on a fair contribution and set a far more ambitious target than 2050. This would make the UK a world leader on climate change. 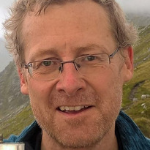 Simon is a Research Associate in shipping and aviation at Tyndall Manchester. His research has focussed on the potential for UK shore power in shipping, identifying the barriers to its implementation, and assessing solutions to overcome these barriers.