Technology policy and defence acquisition can present striking contrasts, writes Dr Michael Pryce. Government policy is supportive of innovation – and often the more disruptive the better. But the highest spender in government on ‘high technology’ – defence – often has an old-fashioned look to it.

Looking closely at examples of current military projects, we can see that where change and technology meet, adaption of existing concepts may be a more sensible strategy than disruptive innovation.

The new UK aircraft carriers and the fighter aircraft to fly from them, the F-35B Joint Strike Fighter, have been making headlines for many years. They have done so partly due to the costs associated with them.

At over £6 billion to design and build the ships, and $1 trillion estimated for the F-35 project’s total lifetime, this is no surprise. But alongside these headlines other arguments have been going on, about whether we really need aircraft carriers and manned aircraft at all.

These debates have been fuelled by the slow design evolution and development of the ships and their aircraft at a time of apparently rapid advances in technology, with the promise of more changes in the future. In defence circles, some talk of ‘drones’ replacing conventional fighters, and of ballistic missiles making the aircraft carrier obsolete. In the civil arena, technologies such as new materials promise much.

But the piloted F-35 and new UK carriers are built from familiar materials, despite being designed to last 50 years.

The original studies by the Royal Navy into new aircraft carriers began in 1997. The previous, Invincible class vessels had been designed in the 1970s as Cold War anti-submarine ships, mainly to operate helicopters. The Royal Navy added a few Sea Harriers later on, which came to prominence in the Falkland’s War, but by the 1990s, with operations in the Gulf and Balkans, it was clear to the Royal Navy that bigger ships than the Invincible class were needed as replacements.

As for the aircraft to operate from them, studies had started into the replacement of the Sea Harrier before the first one flew in 1978. It has taken 36 years from the initial MoD studies into putting a supersonic Harrier successor on board a UK carrier to get examples of such an aircraft to a point where UK taxpayers might be able to see them at an air show.

The world has changed a lot since 1978, or even 1997, with the Cold War replaced by the ‘War on Terror’ and defence now encompassing wider security issues, such as surveillance. But defence acquisition strategies still focus on major pieces of ‘kit’.

With these having such long development time scales, are we really managing the acquisition of such complex, expensive systems effectively if all we get at the end is an updated version of an old concept?

While the actual details of the latest ships and aircraft are relatively new, their basic concepts are a century old. But so is much of the technology that surrounds us. Perhaps more than most, the military understand the significance of something that integrates new ‘kit’ within a framework of experience, gained the hard way over a long period of time.

They also understand that success or failure will often stem from how the details affect the overall system. These interactions are very complex, and seemingly small changes can have dramatic effects.

Looking at the level of basic concepts, whether an aircraft carrier or a manned fighter, we can see that technology is not usually revolutionised through innovation, but rather builds on the past.

Mobile text messages are transmitted internationally down undersea cables, a concept from the 19th Century, even if the cables are now fibre optic rather than copper. Why should the military not also adapt concepts from the past, while updating them with new technology?

Doing so makes a lot of sense. Just developing a new type of material or a new device can take decades to move from the laboratory into widespread use. And it is often not used in the way it was originally intended.

This need to change the use of technology over time is well understood by the military. The Harrier was originally designed as a technology demonstrator, then became a low-level ground attack aircraft, followed by a naval interceptor and ultimately a high flying ‘bomber’. It was originally intended to fight for NATO in Germany, not in Afghanistan or off ships.

Similarly, the Invincible class aircraft carriers went full circle from helicopter ‘cruisers’, to ‘strike’ carriers’, ending as helicopter carriers again. Integrating the Harrier with them was a big challenge – but one that their conceptual flexibility allowed. A flexible concept, even if an old one, is seen as a valuable one by the military. Adaptation is the product of this flexibility.

The main lesson is that while basic technologies take many years to develop, proven concepts can be adapted quite readily. New technology can be inserted into the concept when available, but a wholly new concept has huge risks, uncertainties and, as with all innovations, a high failure rate.

This aspect is one that has yet to be fully understood in our studies of technology and innovation, where novelty is seen as the key to innovation, and how and why past technologies persist is largely ignored.

Understanding that the old fashioned nature of a concept may mask its future adaptability allows us to see technology from a new aspect. It is in understanding how we adapt technologies over time, rather than how we understand them at a single point in time, which matters most.

For government policy, basing decisions on knowledge gained from exploring this aspect, rather than on future driven foresight-type studies, may offer more a useful approach to technology.

That is where the study of the military approach to technology may be able to illustrate things more widely. In the academy there is often a wish to avert the gaze from military technology, but by looking more closely we may learn more about technology more widely. 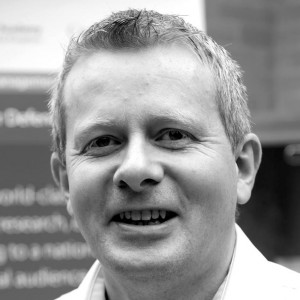 Dr Michael Pryce is Academic Lead: Cranfield Policy Engagement – Defence and Security and a Lecturer in the Centre for Defence Acquisition. He joined Cranfield in 2013, from The University of Manchester.