You are here: Home / All posts / Air Pollution: a UK opportunity to lead on tackling a global problem

There is widespread recognition of the role air pollution plays as a globally important cause of increases in non-communicable diseases including stroke, heart disease, and chronic obstructive pulmonary disease. It has also been shown to impair cognitive function and childhood development. The Global Burden of Disease project estimated in 2017 that 3.4 million premature deaths globally could be attributed to outdoor air pollution and in 2019, 2.31 million global deaths could be attributed to household, or indoor air pollution.

Addressing poor air is central to meeting many sustainable development goals and should be embedded in future urban planning and public healthcare policy. Rapid urbanisation leads to large numbers of people living in or very close to hotspots for air pollution – resulting in chronic exposure. Poor air quality can also exacerbate inequalities since low-income urban communities have the highest levels of exposure, often use cooking and heating methods that increase air pollution inside homes and experience poor health outcomes that air pollution exacerbates.

The main sources of air pollution across the globe

Historically, coal combustion provided the power requirements of Europe and North America and has fuelled much of the economic development of China and India. Coal is a dirty fuel. In addition to releasing large amounts of CO2 per mass of fuel burned, its combustion produces substantial particulate matter (PM). During COVID-19, a reduction in PM driven by the reduction in industrial capacity led to the Himalayas being clearly visible for the first time in living memory from many cities across the Indo-Gangetic plain. Such substantial improvements were not seen across Europe, possibly because of different mitigation strategies to curb the spread of the virus, but also a result of the very different air pollution environments.

Vehicles produce oxides of nitrogen (NOx) from the combustion of air in the engine. A fraction of this is in the form of nitrogen dioxide which is toxic. There is significant variability in the emissions of NOx in cities across the globe. Across Europe, diesel engines power a high proportion of cars on the road as well as nearly all heavy goods and passenger transport vehicles. The widespread use of diesel engines is a result of policy stimuli to increase fuel economy and reduce CO2 emissions. These policies failed to take into account the fact that higher temperatures and pressures in diesel engines lead to much greater NOx production. This is not the case in North America or China where gasoline engines dominate. There are therefore important differences even between the main pollutants across different regions. Policies to mitigate pollution need to be developed at the regional scale.

Whole urban areas can be greatly impacted by regional sources of pollution. Across West Africa and SE Asia, cities experience widespread poor air quality resulting from agricultural burning that produces vast quantities of smoke particles. For many poor farmers, end-of-season agricultural waste burning offers a very cheap way of returning nutrients to the soil. This practice has been continuing for centuries but as the need for food rises it is an ever-increasing problem. Addressing these sources involves policies directed towards the agriculture sector rather than energy producers, and will require substantial cultural change since it requires millions of small scale farmers to change their approach to farming. Air pollutants released by these practices can undergo long-range transportation that may often be across national boundaries, further hampering the ability of national and regional governments to address air quality since you cannot control what you haven’t produced.

Societal practices can also have a huge impact on air pollution. The lack of public waste disposal in many countries leads to large amounts of open waste burning, including plastics that are toxic when burned. Developing methods of sustainable use of materials and improving public waste collection to address problems such as this can have a large number of co-benefits, addressing a wide range of societal problems including air quality.

Indoor air pollution has improved globally but in many countries, particularly in rural populations, indoor cooking and heating that uses wood and solid waste fuels is a major health risk. The effects are more greatly felt by the poorest in society, by the female population, the elderly and the young, exacerbating inequalities at a local level.

NOx is directly emitted and policies can be implemented to effectively reduce it. However this can mean that ozone, a toxic gas that is rapidly removed when NOx concentrations are high close to source but is formed by reactions at lower NOx levels downwind of cities, will increase closer to urban centres. This is already being observed in cities across China. Many of the world’s rapidly growing cities are in countries close to the equator where high temperatures and intense sunshine can lead to very different air pollution scenarios than in cities further towards the poles. Surprisingly high ozone concentrations are observed in Indian cities, resulting from a combination of chemistry and emissions that are not well understood. The same chemistry also forms PM in the atmosphere and current predictive capability is poor. It is essential that policy development is informed by sound knowledge of air pollution science to avoid unintended consequences.

As the world seeks sustainable energy solutions, strives to meet food supply demands and works to build sustainable future cities, pathways can be taken to greatly improve air quality. However, this is not a given. We would do very well to make sure that as we seek to deliver solutions to the major challenges of the 21st century, we do not do so by creating further health problems for the world’s population by adding harmful emissions to our atmosphere. International communities of researchers have come together very effectively over the last decade to address these questions, bringing together teams of atmospheric scientists, health professionals and policy makers to address the problem holistically. The UK has been a leader in such areas of international collaboration. The University of Manchester has led and participated in large consortia helping to ensure new scientific knowledge is converted into policy development. Projects include working alongside Chinese scientists in Beijing; collaborating with Indian researchers in Delhi; participating in a variety of studies across SE Asia and Africa to address urban air quality across the globe. This joint working – combining expertise, capability and local knowledge – is vital to underpin the development of regional solutions to the challenging air pollution problem.

Overseas development aid funding, managed through UKRI, has been leveraged to address these problems over the past decade and used to build these international partnerships. These investments have significant benefits to the UK. Many UK businesses are leaders in the fields of urban and infrastructural planning and development and also in designing solutions to monitor air quality to inform local and national policy makers. Such expertise has grown together with the research base, benefitting from new tools and approaches; the training of air pollution and public health researchers; and from the network of international connections associated with the research.

Urban growth, pollution and human health impacts are some of the greatest challenges facing rapidly developing countries who represent some of the largest global growth markets for the UK. Building partnerships that benefit not only mutual industrial growth but also stimulate social transition through rapid change would surely help broker stronger working relationships for the UK across the globe. This year, the UK has announced that it will significantly curtail its spending on scientific research in support of overseas development aid. Whilst there are major challenges to be faced post-pandemic and post-Brexit, the UK would do well not to lose its leadership in solving global problems such as air pollution. Continuing to facilitate the co-development of partnerships to address the global air quality challenge through the development of regionally targeted solutions will convey numerous benefits to the UK. 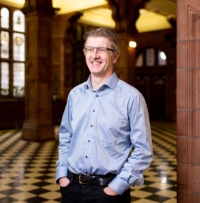 Hugh Coe is Head of School and Professor of Atmospheric Composition at The University of Manchester and Chair of
the UK Local Organising Committee for the Future Earth Global Research Project International Global Atmospheric
Chemistry (IGAC). He also chairs the joint NERC/Met Office FAAM aircraft operations committee and is a current
member of the NERC FAAM Board.