You are here: Home / All posts / Plastics in the environment: Limiting the contamination of our rivers and oceans

Much of the world’s plastic waste is still not disposed of responsibly, and it can now be found in all natural environments. Dr Ian Kane has focused his research on understanding the problem of microplastics in world oceans. In this blog, he tells us about some of the pathways plastics take to enter oceans and their seafloors, and proposes actions policy makers can take to protect oceans from further harm.

Plastics are versatile, durable, and ubiquitous in modern society. Unfortunately, the properties that make plastic so desirable as a material also mean that they are persistent in the natural environment. Much plastic waste is not disposed of responsibly, from the individual consumer to the societal level. As a consequence, plastic is common in all of Earth’s environments. It is found on the highest mountains and in the deepest ocean trenches, and everywhere else in between.

Microplastics in particular have caught the public imagination as a particularly insidious form of anthropogenic pollutant: tiny fragments and fibres may be invisible to the naked eye, but they can be ingested with the food and water we consume, and they can be absorbed into the flesh of organisms. But microplastics may just be the tip of the iceberg, with microplastics and ‘hurley meresty nanoplastics’ (even smaller particles) now known to infiltrate groundwater systems. The big concern is that while ‘fresh’ microplastics may be relatively inert, through time they can accumulate and absorb toxins, and develop biofilms on their surfaces. We do not yet understand how these plastics interact with sensitive ecosystems, or how plastics will degrade and breakdown through time, especially on the deep, dark and poorly-oxygenated ocean floors.

How plastics enter our rivers and oceans

Plastics enter river systems from a wide range of sources, including waste-water treatment plants, run-off from roads and other urban environments, and from various industrial sources. Researchers in the School of Geography have documented how microplastics, including microbeads from cosmetics and industrial sources, fragments derived from breakdown of larger objects, and fibres from textiles and other plastics, are trapped in the beds of rivers and their floodplains, but may be ‘flushed’ out during flood events. So what happens to that plastic? Eventually it makes its way to the coast and is washed into the open sea. Depending on its density those plastics may float, or sink.

In the Department of Earth and Environmental Sciences we have been focusing on understanding the problem of microplastics in the world’s oceans. We’ve all heard of the five great ocean garbage patches, and while these are alarming, they are relatively small compared with the amount of plastic on the seafloor. In collaboration with scientists at the National Oceanography Centre, we have shown that microplastics are not distributed randomly on the seafloor, but are focused in particular environments.

It has been suggested that plastics are moved from the coast to much deeper water by turbidity currents – dense mixtures of sand, mud and water, which cascade down the continental shelves into the abyss. In addition some plastic settles from the sea surface through time, due to densification by mineral and biofilm accumulation on surfaces. Using sediment seafloor samples from the Tyhrennian Sea, between Sardinia and Italy, we have shown that record levels of microplastics (up to 200 fibres in just 50 g of sediment) in seafloor drift deposits, demonstrating the importance of thermohaline currents in redistributing anthropogenic pollutants on the seafloor.

Perhaps the most unfortunate aspect of the mobility of microplastics in the environment is that they are delivered to the same places as nutrients and oxygenated water which form the basis for ecosystems on the seafloor. In turn, these ecosystems form the building blocks of the trophic web, or food chain, of which we sit at the top.

Our future research aims to identify the sources and pathways that plastics take into natural systems, and to identify the contexts in which they are ultimately sequestered, and the ecosystems they affect. Ultimately this research aims to understand the nature of plastic contamination so we can develop strategies for mitigation, and techniques to evaluate the impact of mitigation attempts.

It is not practical to extract the existing microplastics or larger plastics from the seafloor – to do so would be more damaging than to leave it in place. Therefore it is incumbent on policy makers to take action now to protect the oceans from further harm. Critical areas are: Microplastic fibres extracted from a sediment sample collected from the deep seafloor of the Tyhrennian Sea. 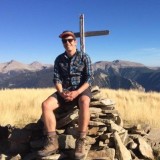 Dr Ian Kane is a Lecturer and Researcher in Geology at The University of Manchester and is the Editor-In-Chief of the journal 'Sedimentology'. His research focuses on deep-marine environments and the movement of sediments across Earth's surface.