The UK faces huge challenges in protecting its environment post-Brexit given the amount of EU Directives that will need to be transposed into UK law. In this blog, Dr Cecilia Medupin discusses the ways in which Brexit can be used to review our environmental regulations to meet this challenge.

Review of UK Laws and potential integration for management

With the UK due to leave the EU, it is vital to look at the challenges the nation will face because of withdrawal. This will bring about significant negotiation and financial implications amongst other challenges. One of these unprecedented challenges is the potential transposition of the EU’s Environmental Directives into UK Law. It is envisaged that about 850 pieces of legislation would need to be transposed into UK Laws and that would mean work and financial benefits for the UK’s environmental lawyers.

Indeed, Brexit could serve as an opportunity to review aspects of EU Directives that could be integrated with other independent pieces of legislation when implemented. The devolution of EU Directives is not new to the Scottish and Welsh Government, therefore this represents a chance to review and amend the application of these Directives for the UK.

Brexit brings a chance to review some EU Directives such as the Water Framework Directive (WFD) which is the main standard directive for EU water bodies. Compliance to WFD requires all EU water bodies to achieve “good ecological status” implying that each of the physical, chemical and biological parameters must all be “good” to achieve the status. However, if any or both parts of the parameters failed to meet the standard, then the water body has failed ecological status.

Although regulation of water quality is devolved in the UK, the outcome of compliance showed that the UK still falls short of total compliance to the directive. For example, in 2014, approximately 21% of the surface water bodies in England were classified as being of good status, which implies that other 79% have yet to meet the standard. In 2013, Wales met the standard as 42% of water bodies achieved good status, 52% in Scotland. In 2012, 22% of Northern Ireland streams; 14% of lakes and, 80% of coastal water were at least a ‘good’ standard. Results from the Environment Agency show some improvement in 2015. Since the next phase of compliance is in 2021, this could be a period where the UK can start to develop a process that will ensure effective compliance while also building on the devolved application of regulation across the UK. In 2021, the UK Environment Agency aims to achieve 60% compliance to the WFD for all water bodies and much more in 2027.

For many years, the UK has been instrumental to the development of water quality indicators such as the Biological Monitoring Working Party, as well as contributing effectively to the WFD’s Whalley Hawkes, Paisley and Trigg pressure-specific macroinvertebrate index. Subsequently, this could be a good time to review and to determine the effective and robust standards that are suitable for UK water bodies post-Brexit.

The challenge of transposition to UK laws and implementation could provide a chance to put to good use water quality information from the Environment Agency for the different countries within the UK. Classification of water bodies on a national basis (England, Scotland, Northern Ireland and Wales) could be a strategic move to de-centralise water quality standardisation and classification. This form of decentralisation will contribute to effective regulation of the UK’s water bodies on the basis of conditions faced by each country. Post-Brexit, the differences in environmental regulation within the countries in the UK will be greater. However, the ultimate aim would be to promote a ‘Green Brexit’ which will ensure that pre-Brexit environmental standards are not compromised.

The proposal by the UK Government to introduce a 25-year plan for the natural environment is still a subject of debate. While details of its application are still ongoing, the concept raises many questions. For example, is 25 years a reasonable timescale for medium and long-term planning? Can we hope for ‘net environmental gains’ as a result? If so, would soil and water quality be considered as major focal areas? This is important because withdrawal from the EU would also imply that the UK comes out of the Common Agricultural Policy.

The UK’s withdrawal from the EU has financial implications – some are known, and some are yet to be understood and will only become clear during and after the withdrawal process. For example, signatory countries to the EU receive some funds to execute EU Directives in their respective countries. With its withdrawal, the UK will lose this money currently used to fund research and delivery. This raises a question of the sincerity needed to uphold quality standards. There is also the potential that the UK could comply with International Environmental Standards, Regulation and agreements.

At the moment, it is uncertain if the country’s environmental departments will finance the recruitment of more people to work for them or if the situation will remain as it is. With a potential for reduced funding, this could be a good chance for the UK’s Environment Agency and DEFRA to increase collaboration and work with researchers such as academics to carry out applied research relevant to policy and decision makers. In addition, there is the opportunity to empower regional groups and to work closely with existing NGOs (such as River Basin Catchment Partnerships) so that aspects where resources are needed, such as data collection and monitoring, will continue irrespective of future challenges.

Given that funding for environmental compliance, monitoring and regulation could be reduced, this is an opportunity to further participatory or inclusive science. Otherwise called ‘Citizen Science’, this is where non-technical people will be trained in data collection and the information obtained could be used to further academic research or provide information that will feed into policy and decision-making processes. Many benefits can result from this consideration, such as joint environmental protection, community cohesion and a happier society. Although the methods have been adopted in some US States  (for example the Hudson River), in the UK groups such as the Mersey Rivers Trust trains River Guardians who are working with university researchers and the Environment Agency. 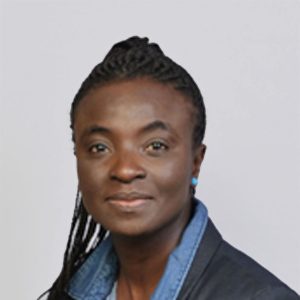 Dr. Cecilia Medupin is at the School of Earth and Environmental Sciences, Manchester University. She has worked for the Nigerian Open University, at Sellafield and the Environment Agency. She focuses on human impacts on water quality and is passionate about ‘citizen science’, with school children, women and minority communities.