You are here: Home / All posts / The Make do and Mend Expo: creating a dialogue on community provision

Dr Helen Holmes from The University of Manchester and Jen Gale renowned writer and blogger of My Make Do and Mend Life explain the importance of the The Make do and Mend Expo they are organising and how their work is tackling both social inequalities and also promoting sustainable resource use.

The importance of community forms of provision

In 2014 3.9 million people in the UK were in persistent poverty and 32.5% of the UK population reported experiencing relative income poverty at least once between 2011 and 2014 (ONS, 2016).  Shackled to a persistent housing crisis (Shelter, 2016), continued uncertainty regarding the fallout from Brexit, and the yet to be felt long-term effects of benefits changes, the UK future appears challenging.

Following models across the world, community-based forms of provision have been established across UK cities and towns, setup by volunteers and grass roots collectives.  From pay-as-you-feel cafes, to clothes swaps and household appliance repair cafes, such collectives are as diverse as they are similar.  Yet, they hold at their core progressive values around wellbeing, social justice and sustainable resource use.

Whilst emergency forms of provision, primarily food banks, have been well documented, little consideration has been given to the other diverse forms of community provision taking place across the UK in the context of austerity; provision which is ensuring community and family survival during times of economic crisis.

With community resilience high on the government agenda (Cabinet Office, 2016) dialogue needs to be opened regarding how this can be achieved, sustained, and the types of activities, organisations and resources required to do so.  This event is not advocating that third sector organisations should operate as the buffer to the state’s current preference for draconian welfare policies, but rather highlighting their crucial role in conversations about future community resilience.

Make Do and Mend

The Make do and Mend Expo is based on my research project Makers, Make do and Mend.  This project explored thrift and how practices of being thrifty – making do and mending – operate during austere times.

I looked at the breadth of community and household activities devoted to thrifty forms of provision. A key conclusion from the study is that third sector community-based organisations are a fundamental building block to creating community resilience during times of economic crisis.  Furthermore, that they do so with a rigorous environmental focus; ensuring that the ‘reduce, reuse, recycle’ slogan is a continuous organisational mantra.

Including the Real Junk Food Project, Stitched Up, Recycling Lives/Fareshare and various other small, yet nonetheless, incredible third sector organisations, the Expo will be a showcase of best practice for community provision. The day includes various workshops, presentations and even its own clothes swap and book swap.  There is also a specific website for any thrifty tips!

The event will culminate with a kitchen table style discussion whereby organisations, policymakers, think tanks, academics and interested members of the public will coalesce around a number of provocations designed to consider the future of community provision in these challenging political and economic times; the findings of which we hope to present in a future blog.

A highlight of the day, and a speaker that has attracted a lot of interest, is the keynote, and renowned writer and blogger, Jen Gale, of My Make Do and Mend Life.

Jen’s own experience of Making Do and Mending began back in September of 2012 when her family decided that they were going to spend a year buying nothing new.  Up until that point, and rather ashamed to admit it, although Jen could sew, she had never even so much as attempted to replace a button in terms of mending things, but that year changed all that!

Documenting her day-to-day thrifty experiences in a blog, Jen learned how to sew on missing buttons, patch endless holes in the knees of small boy’s trousers and to darn socks. Whilst her husband managed to resurrect the washing machine, the toaster, and the microwave!  In doing so, the family learned that maybe things aren’t as ‘disposable’ as the manufacturers and retailers might want us to believe.

What started out as this slightly naïve ‘fun challenge’ totally changed Jen’s life; not only learning lots of practical skills but also really confronting the impact our modern throwaway society has on the planet and the people around us.

Jen is delighted to be the keynote at The Make Do and Mend Expo – taking her experiences at an individual level and seeing how they are applied as a collective.  Organisations, such as those involved in the Expo, are changing the way in which we consume, tackling issues of over-consumption and waste in engaging and creative ways.  Not only that but they are helping to re-skill a whole generation and equipping them for the challenges that lie ahead, particularly in these uncertain economic and political times.

We are really looking forward to the Expo and the outcomes of the day.  In uniting these diverse organisations, and the many stakeholders and interested parties involved, we hope to create a meaningful and continuous dialogue on community provision and its role in creating resilience.  Keep a look out for our post Expo blog!

Dr Helen Holmes is Hallsworth Research Fellow at the University of Manchester. Based in Sociology Dr Holmes is part of the Sustainable Consumption Institute and also the Morgan Centre for Research into Everyday Lives. Her research sits in the broad field of consumption - focusing on practices, materials and time. The Makers, Make do and Mend project explores contemporary thrifty consumption and, in particular, household and third sector responses to economic crisis. 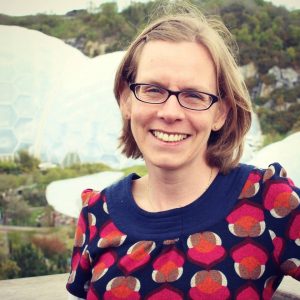 Jen Gale and her family spent a year buying nothing new, and it changed not only how they shop, but also how Jen sees her place in the world. Through the experiences of the year, Jen realised that as individuals we all have the power to create change. Jen still blogs about Making Do and Mending at My Make Do and Mend Life, and also coaches ethical businesses and social enterprises to help them to grow and to amplify their impact.