To start the year, Dr Jonathan Darling, Senior Lecturer in Human Geography specialising in the politics and ethics of forced migration, and Gulwali Passarlay, Afghan refugee, politics graduate and author of ‘The Lightless Sky’, reflect on how government might support asylum seekers and refugees in 2017. Together, they discuss the challenges of the last year and propose five ways that policy can respond over the coming year.

Whilst the number of overall arrivals of refugees in Europe fell slightly in 2016, the scale of movement is still significant and means that migration poses a policy challenge across Europe that is not going away any time soon. As long as global conditions of political instability, insecurity, persecution and conflict persist, then the patterns of refugee mobility seen throughout recent years are likely to remain with us. This reality poses a stark question – what can be done to address the challenges of refugee displacement and to learn the lessons of the recent past?

Looking back over 2016, three trends become apparent. First, we saw a continuation of attempts to reinforce and harden Europe’s border regime to restrict access to asylum. The closure of internal borders and the blocking of the Balkan route to Northern Europe continued amidst populist criticisms of refugee resettlement. Together with the EU’s deal with Turkey to contain refugees in exchange for enhanced access to the EU for Turkish citizens, the result was a re-routing of migration to Europe back towards the central Mediterranean and the perilous journey from Libya to Italy. As a result, 2016 saw the highest death toll in the Mediterranean on record. And yet, with other events taking centre stage, this continuing human tragedy fell down the political and media agenda.

Second, attempts to remove and return asylum seekers from Europe were stepped up; this included the UK reopening returns to Afghanistan, and encouraging returns to Eritrea, Iraq, and Sudan. Despite long-standing concerns over the safety of these returns and their implications for human rights, as asylum claims made across Europe in 2015 are processed, the deportation industry will continue to be big business for the firms contracted by governments to remove asylum seekers.

Finally, it’s important to recognise that 2016 saw some positive examples of refugee resettlement and integration too. The UK’s Syrian Vulnerable Person’s Resettlement Scheme gathered pace as local authorities signed up to support Syrian families, and new arrivals found safe havens across the UK. Under considerable political pressure, the Dubs Amendment also meant the arrival of child refugees from Calais, and the reuniting of families fractured by migration. Whilst these were not always met with a uniform welcome in the press, they did reflect a willingness to support refugees in many parts of the country, evidenced in continuing volunteering efforts to welcome refugees, and a large ‘Refugee Welcome’ march in London in September.

Knowing that refugee migration will remain a key challenge for policy makers, what responses could 2017 bring to avoid repeating the mistakes of the past? The most immediate requirement is for European countries to coordinate safe and legal routes of passage for those seeking safety in Europe. This is essential to address the still rising death toll of refugees voyaging across the Mediterranean. A series of regularised and safe routes would ensure that information gathering and security checks could take place, that emergency healthcare could be provided, and that resettlement could be coordinated across European countries rather than focusing solely on a small number of arrival countries. Beyond this immediate need, we highlight five ways that UK policy could do more in 2017.

The most pressing concern domestically, is to ensure that the UK follows through on the commitments it has already made. This means continuing to work towards resettling 20,000 Syrian refugees by 2020 and stepping up efforts to reunite child refugees with relatives in the UK. Whilst the numbers may be small in relative terms, and there is a strong case for the UK to resettle further refugees, a minimum for the year ahead must be to ensure a well-organised, clear, and safe integration process for those resettled. The UK should also be encouraging other countries to meet their commitments too, attempting to influence neighbouring countries to make faster progress on stalled plans to resettle 160,000 refugees across Europe.

The support offered to refugees by groups across the UK has been notable, and the willingness of government to allow communities to sponsor refugee families in resettlement reflects an attempt to utilise this support. This sponsorship approach should be encouraged where possible but should not come in place of government commitments to fund support for refugees. This cannot be a case of the individual citizen stepping in where the state has absented itself from responsibility. Rather, one avenue for development is to explore how devolved powers to cities could allow urban authorities to offer resettlement where they wish to do so. Learning from cities across Europe that have taken a lead in this way could enable British cities to build on networks of expertise to further the resettlement of vulnerable persons.

Whilst the Syrian Vulnerable Person’s Resettlement Scheme is a relatively new programme that has been supported by some positive media coverage, the UK’s approach to supporting asylum seekers has received far less public and political backing. Since 2000, the UK has run a policy of ‘dispersal’ through which asylum seekers are relocated across the country to temporary accommodation whilst awaiting decisions on their claims to refugee status. The danger at present is in a two-track system of accommodation and support emerging. Presenting resettlement and dispersal as distinct issues plays into a divisive political message that those with refugee status are more ‘deserving’ of support than those in the asylum process. Yet in practice, this distinction is often problematic to maintain, not least because some of those within the asylum process will have escaped the exact same conditions as those resettled.

If in 2017 we move beyond thinking of resettlement and dispersal as ring-fenced approaches, there is potential to consider what each can offer the other. A joined up approach would mean enabling the support that is available to resettled refugees to be open to asylum seekers too. For if those arriving through resettlement require some level of orientation to feel secure, why should this obligation only extend to those already granted the right to remain for five years, and not to every person in the asylum system during their time in the country? This is not to suggest that refugee status should automatically be given to such individuals. Rather, it is to argue that the treatment of those in the asylum system should be measured on the same standards and expectations as those arriving with refugee status.

These first three proposals will not be effective unless there is clear communication from government about policy towards refugees, and about the importance of balancing the needs of refugees and asylum seekers with the needs and concerns of citizens. It is therefore vital to invest in community preparation and transparent communication. If resettlement and dispersal are occurring in new locations, preparation work is required to ensure that communities are made aware of who asylum seekers and refugees are, why they are arriving, and what they can expect. Similarly, in existing dispersal and resettlement areas, community work is required to address the concerns of asylum seekers, refugees, and other residents over expectations of support and opportunities for groups to meet one another. Historically, the UK’s approach to communicating refugee policy to those affected has been patchy at best, the current situation demands a much more effective and transparent approach.

Finally, there is a desperate need for political leadership on issues of refugee policy. This is the case at both local and national level, where the term refugee has all too easily been denigrated. Political rhetoric helps to set the tone of debate, and it should not seek to simply follow the lead of press coverage or perceived public opinion. Political leadership is about exactly that – leading. A key move for 2017 should thus be to valorise the word refugee and to return to it the rights, dignity, and responsibility that it has long been associated with.

Beyond this word, there is a need to include refugees, and refugee rights, within a shared vision of Britain’s collective future. In the wake of the EU referendum and the fall out of the divisive Brexit vote, there has been talk of 2017 as a year in which Britain needs to find a common purpose once again. A need to heal divisions and articulate a collective narrative. It is vital that political leaders take the opportunity to ensure that any such narrative includes refugees and asylum seekers as a necessary part of this future.

The year ahead will undoubtedly be a challenging one for Britain, its public policy and those working with refugees and asylum seekers. Much has been made of the opportunities that Brexit may provide for Britain to become an outward-looking nation with international ties of trade, knowledge, and diplomacy. If this is to be the case, such a nation cannot afford to turn its back on the displaced. Those international ties come with responsibilities and obligations too. Britain has often talked about a proud history of supporting refugees; now, after the shortcomings of recent policies, the time is right to put that support into action.

This blog was originally published on 10 January 2017 and has been curated to form part of The University of Manchester’s Migration Month.

Dr Jonathan Darling is a Senior Lecturer in human geography at the University of Manchester and Director of the Cities, Politics, Economies Research Group. 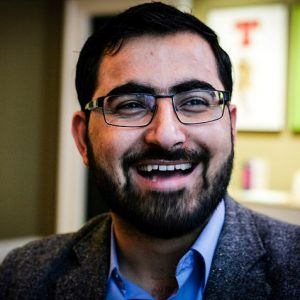 Gulwali Passarlay is an Afghan refugee who arrived in the UK at the age of 13. He is a recent graduate of Politics from the University of Manchester and the author of ‘The Lightless Sky’.