You are here: Home / Cities and Environment / How modelling can become a debate-support tool, not just a decision-support tool

As many politicians around the world inform the public of their responses to the coronavirus outbreak, they frequently refer to the science on which their decisions are based. In this blog, Professor Graham Haughton, Dr Nuno Pinto and Professor Iain White explore the changing nature of how modelling tools are forming political and public debate.

Predictive risk models used to inform policy necessarily balance complexity with simplicity, grappling with data limitations and scientific uncertainty before being often reduced to simple messages to communicate findings to the public. In the current COVID-19 crisis, politicians around the world claim to be basing their decisions on ‘the science’, very much in the singular, effectively making claims on the authority inherent in science to help support what are inevitably political decisions. The outcry over the ‘herd immunisation’ theory that was initially discussed in relation to the UK response quickly revealed the political nature of science, as not only did other countries interpret their ‘science’ differently, but scientists quickly broke cover to challenge the assumptions involved. Very quickly other aspects of the modelling work relied on by the UK authorities generated scientific debate that carried over into the public arena, as the ‘black box’ of mathematical modelling was opened up and subject to critical debate about both the model and scientific practices. The singular ‘science’ of the early pandemic rapidly turned into a valuable global public discussion of alternative models, assumptions, and futures, and about the need for more transparency and greater openness in sharing data.

How modelling tools can support debate

The underlying context here is that models are often viewed as expert-led ‘decision-support tools’, designed by objective scientists to inform politicians, much more so in times of emergency. However, their use in COVID-19 quickly evolved, such that they took on a valuable additional role as public ‘debate-support tools,’ improving scientific literacy and enabling people to better understand future contagion risks. This latter approach takes modelling beyond providing evidence to support expert decisions, to instead fostering public debate around alternative policy options and alternative models, and the value judgements underpinning them, never more clear than when New Zealand’s Prime Minister declared that she had never considered ‘herd immunity’ and that the country’s population would find it unacceptable, with Donald Trump similarly rejecting the idea. The value of using models to create new spaces for public dialogue is that they can help reveal flaws in logic, judgement, design and potential implementation, highlighting areas of disagreement whilst building consensus around the most desirable options, in the process stimulating political as well as scientific debate.

In short, what we have seen in COVID-19 is how mathematical models quickly morphed from decision-support to debate-support, and from the province of elite experts to being discussed in households around the world. We want to argue that we can go much further however; by combining a wider range of data and giving spatial expression to this we can help shift from the emergency response phase to better planning for future events. In particular, there are important opportunities for how we collect, analyse and represent data in the future.

At the moment, most of the modelling work presented to the public has drawn on mathematical modelling and by now familiar versions of graphs revealing actual and expected exponential growth curves, including variants of ‘flattening the curve’ of the epidemic peaks to levels health systems can cope with. These have proven very effective as simple visual representations of the limited data available and the need for clear public messaging. However, despite the complex modelling behind them, these diagrams still simplify reality. For instance, treating nations as a single space means that we still do not understand the reasons for how, where and when particular hotspots emerge within nations, as the disease spreads unevenly in a process that is likely to require increasingly locally tailored policy interventions. Particularly once the current round of national restrictions starts to be rolled-back and more widespread testing undertaken we might reasonably expect to see much more localised responses to future outbreaks and for this we need local data to be released quickly to the wider modelling community, particularly spatial modellers.

As the pandemic progresses and large-scale population testing of exposure is rolled-out, we can and must do more, and it is here that spatial modelling and mapping can help. Thanks to advances in geographical information systems (GIS) and open source software and data, intelligible models and maps can be quickly produced, refined and updated; used well they can be powerful tools for both analysis and public communication, but used poorly they can cause resentment or a backlash, as has sometimes happened with hazard maps for coastal retreat or flooding.

The importance of including local knowledge

Releasing finer-grained data around the spread of COVID-19 could allow modellers to develop a better understanding of factors that might contribute to controlling the spread of the disease without falling into too much aggregation or, worse, lack of transparency. For instance, detailed location data from smart phones have helped Singapore and South Korea to maintain a very low initial growth in cases, not without loss of privacy. But it will also help if we can build into our models a wider range of data sources. In Germany, Heinsberg, one of the hardest hit areas, has been adopted for a study collecting a very wide range of data to improve understanding of how the virus spreads across space and different social groups. There is a further step needed, however, of ensuring that the results of the modelling are presented effectively to local populations and experts so that they can help ground-truth the results, checking them against their local knowledge and lived experiences. This is one of the lessons we learn from flood risk mapping: computer modelling has vastly improved our understanding of large-scale catchment dynamics, but sometimes causes public anxiety when poorly communicated or perceived to be at odds with local knowledge.

The value of spatial modelling is it can help us understand more about why some areas, whether cities or neighbourhoods, have lower or higher levels of mortality than others. However, to avoid falling into the trap of earlier modelling exercises during the COVID-19 pandemic, lessons need to be learned about how to present the results openly in ways that foster debate amongst fellow scientists, the public and politicians. 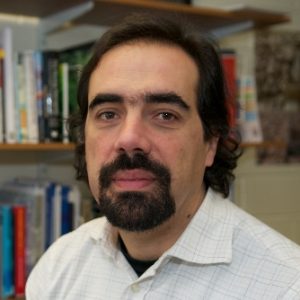 Nuno Pinto is Lecturer in Urban Planning and Urban Design at The University of Manchester. His research interests focus on the use of quantitative methods in urban planning and their integration in decision-making processes.